What is it like to translate Nobel Prize Winner Naguib Mahfouz?

On Literature and Philosophy is a translation of another book by the same title, Ḥawla l-Adab wa-l-Falsafa, which comprises early, non-fiction essays of Naguib Mahfouz that were originally published in various Egyptian journals between 1930 and 1945 – though the majority are dated prior to 1937. With regards to the translation, I have generally inclined towards fidelity to the original essays, as opposed to producing a more corrective translation. At times, the thought and writing in these early essays lack sophistication, and much of this has been reproduced in the translation, as will be apparent. The reasoning for this is that the importance of these essays, as I see it, lies more in their value as historical documents – which can provide insights into the historical milieu, and the mind of Mahfouz himself – rather than in their value as informative pieces about philosophy and other topics, though would almost certainly have been the original, underlying intention behind their publication.

Textual errors and defects in Arabic are not uncommon in the original collection. These may derive from the sources Mahfouz was using at the time, or they may be due to failures occurring during the editing processes prior to their publication. Obvious typographical errors have been corrected where they have been identified, while factual errors have generally been left in the text but footnoted. Where Mahfouz has used quoted material in his essays he did not provided any reference to his sources. Some of these quotations appear to me to be quite odd in the original Arabic, and probably incorrect, but without knowing his sources it can be difficult to offer alternative renderings. In light of this, his quotations have been reproduced for the most part, even where the correctness of these seems questionable.

A significant problem in the essays is that while Mahfouz discusses a great many individuals, particularly in the essays dealing with philosophical themes, he very often gives only the surname, without providing the forename of the individual in question. The matter of confirming whom he is referring to was sometimes further confounded by the use of different, and incorrect, spellings in the texts for the same persons: the name ‘Thucydides’, for example, usually spelled now as thūsīdīdīs (and sometimes thiyūsīdīdiz) is written as tiyūkīdīd, and subsequently as īthīdīd, in one paragraph. While very well-known personages, such as Thucydides, were fairly easy to identify and correct, for the most part, there were other instances where, not being provided with a forename, made it difficult to identify the person being cited with any great certainty. One example of this is where Mahfouz discusses someone by the name of ‘Marshall’ (mārshāl), since no forename is provided, and since context, which might have provided greater clues to the person’s identity, is slight, it remains a matter of speculation as to who exactly this Marshall is. Furthermore, there were also a few instances where I was unable to even know the correct spelling of the name cited, never mind identify whom it referred to. Such instances have been footnoted.

Another difficulty encountered in translating these essays pertains generally to Mahfouz’ use of language, particularly with regard to the philosophical pieces. Some instances are more quaint than problematic. However, problematic instances do occur where precision in language is lacking. Mahfouz’ focus is almost entirely upon the Western philosophical tradition, as opposed to Islamic philosophy, where much of the Arabic terminology would have been more or less fixed. While he does use precise Western terms, be they Arabicised loan words – such as trūbīzm (‘tropism’), for example – or words given in their original European language, such as ‘reflexes’, he frequently conveys modern Western terms using Arabic words that do not always closely correspond. Complex ideas are often conveyed using what appears to be improvised or simplistic language, and care is not always taken to precisely, and consistently, differentiate between certain concepts. Perhaps the most difficult instance of this is his general use of the word nafs throughout to convey a number of quite different, and distinct, concepts such as ‘soul’, ‘psyche’, ‘mind’, ‘self’, ‘essence’, and others. Generally speaking, where possible, I have tried to translate terms according to context, such as the historical periods they may pertain to, or in light of the philosophers with whom they are associated.

I should also note that the punctuation in the translation differs from that used in the Arabic, but this is to be expected, and I have tried to ensure that it does not distort the meaning of the original text. I have also changed the paragraphing in the translation; Mahfouz often uses very brief paragraphs, sometimes consisting of only one or two sentences. I have tended to amalgamate smaller units into larger ones where these are related to one another, since the intervention of such edits has very little impact upon the actual meaning of the texts. Lastly, I am grateful to Russell Harris and Rasheed El-Enany for their advice, and their useful suggestions regarding some of the more difficult aspects involved in the translation.

This text will appear as Aran Byrne’s Translator’s Preface in the upcoming On Literature and Philosophy: The Non-fiction Writing of Naguib Mahfouz, Vol. I, by Nobel Prize Winner Naguib Mahfouz, out with the Gingko Library in June 2016. 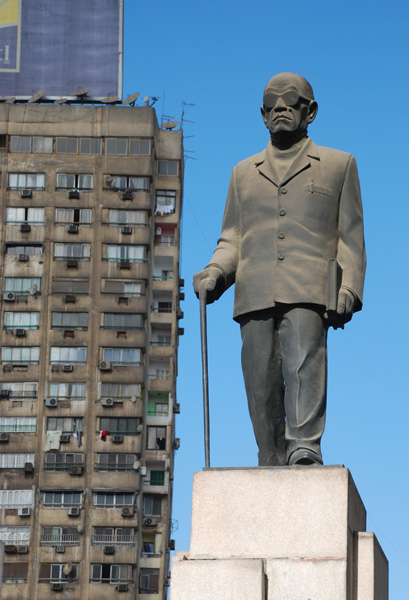 Photo by Hisham Zayadnh on Unsplash